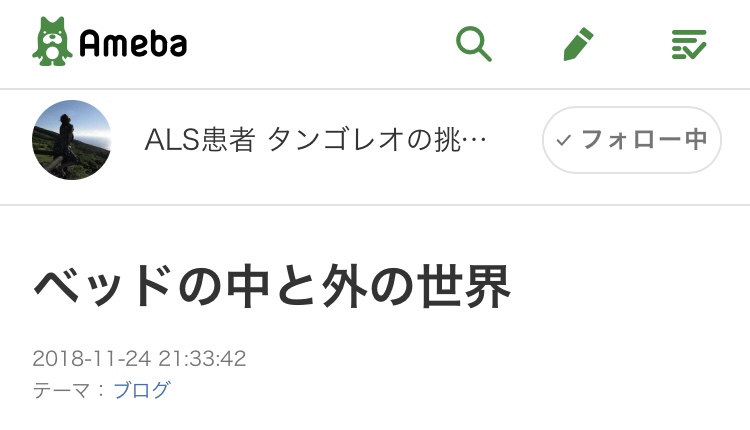 Hayashi’s next post was posted on November 24 2018 and is titled “The world inside and out the bed“. In it Hayashi reports how “uncomfortable” life has become for her. Hayashi has trouble swallowing “After swallowing became worse, I could not lift my face normally even in a wheelchair.” and sleeping “Somehow uncomfortable, sleeping is uncomfortable, unnatural.”

Aa in previous posts, because Hayashi used ‘assisted text-to-speech’ technology her posts appear like a stream of consciousness. Whilst they are translated, the paragraphing has not been altered.

After swallowing became worse, I could not lift my face normally even in a wheelchair.This is because saliva flows into your throat and causes it.

It’s painful if I don’t look down.

So I couldn’t go out.

After that, I thought about going down with the wheelchair fully tilted down and continuous suction with my face facing right just as if I was always sleeping in bed.(Although I also considered making a wheelchair bespoke, I still use Netty for ease of use .) Still, it’s kind of troublesome.

I was going to exchange my stomach wax in October.The exchange was easy as usual.

But when I lie down in bed after returning,

It’s my first time to feel this

I feel that I try not to feel unconsciously.I’m distracted.

Because if you figure it out, it becomes Neuroses. Go mad.

I was consciously distracted that day. As much as possible.

Unusually, my friends gladly told me that I wanted to go, and immediately decided the date.

How many years have it gone?After the renewal, I decided to go to a zoo I had never been to.

A place I’ve been accustomed to since my childhood, when I was an adult and when I returned home, I sometimes went to my father who likes animals.

It looked completely beautiful, but the trains, boats, and ferris wheels that I used often left a retro appearance.

It seemed to me that the animals had an extraordinary life force in the superintendent.Much stronger than me…

Some children approached as if they had found something strange.

I don’t care about the eyes of others, no matter when.

I don’t want to sleep in bed.

I want to get up and go out.

But when I go outside and see other people

I’m a body that can’t even do that ordinary…

I feel it in my body.

No matter what kind of fun you plan, there is nothing wrong with living in such a body…

0 comments on ““The world inside and outside the bed” writes the late Yuri Hayashi, ALS patient”